Submitted by anita.havele on Thu, 2015-10-22 08:49
The Blender 3D authoring tool now has improved support for X3D Graphics thanks to NIH 3D Print Exchange. 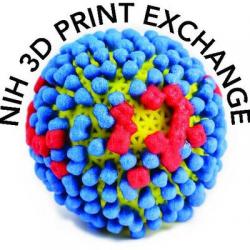 Blender is a popular open-source 3D authoring tool written in C++ that includes support for import and export of #X3D scenes.   The Extensible 3D (X3D) Graphics International Standard is the third-generation successor to the Virtual Reality Modeling Language (VRML).

Vsevolod (Seva) Alekseyev is a lead programmer at the 3D Print Exchange hosted by the U.S. National Institutes of Health (NIH).  He has contributed significant improvements to the Blender source code for importing X3D.  Support now includes all of the geometry nodes from Rendering and Geometry3D components, image and pixel textures (including primitive geometry), TextureTransform to shift 2D image texture coordinates, Lighting component (PointLight DirectionalLight SpotLight) and Viewpoints, which are essential for scene navigation. These improvements have been released as part of the Blender source trunk in time for the annual Blender 205 Conference which runs 23-25 October 2015 in De Balie, Amsterdam.

Seva reports:  “It is great to develop expanded support to a larger subset of the X3D standard.  Future work might handle advanced textures, scene animation and user interactivity, if there increasing is community demand out there.”

Dr. Darrell Hurt is Chief of the Bioinformatics and Computational Biosciences Branch (BCBB) at NIH and a member of the Web3D Consortium Board of Directors.  He notes “Blender is important.  This dramatic increase in functionality and performance brings value to the NIH 3D Print Exchange program and the larger 3D printing industry.”

Anita Havele is Executive Director of the Web3D Consortium.  “We are proud of how NIH is always innovating.  Our members also support a public community with the Project Wish List.  We invite companies, research institutes and individual professionals to join the Web3D Consortium and make a difference.”