Submitted by anita.havele on Mon, 2021-02-22 00:13
Web3D and Khronos have signed a liaison agreement to cooperatively advance their standards to support Web-based 3D visualization, modeling and streaming. This agreement formalizes the mutual interest of the two organizations to build cohesive ecosystems of related technology standards including X3D and glTF.
Contact:
anita.havele 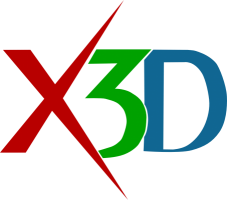 SAN FRANCISCO, February 23, 2021 (Newswire) - The Web3D Consortium and The Khronos® Group have entered into a cooperative liaison agreement to foster interoperability and synergy between the X3D™ and glTF™ open standards, encouraging the development of cohesive standards for interactive 3D on the Web. Web3D's X3D standard and Khronos's glTF standard are complementary, each addressing different requirements and use cases for 3D data management, visualization, and streaming. This agreement enables Khronos and Web3D Consortium to collaborate with a shared goal to integrate glTF 2.0 into X3D V4 to improve the visualization and streaming of 3D data.

X3D and glTF are crucially positioned as stable, open solutions for 3D data portrayal across diverse markets. X3D is the only open, royalty-free and International Standards Organization(ISO)-certified technology available for interactive 3D graphics on the Web. X3D combines the definition of interactive run-time behaviors and a 3D asset format. X3D continues to grow and provide unprecedented value for the capability, longevity, and ownership of 3D content. The use of X3D has increased steadily in systems throughout the world, delivering durable applications in design, GIS, medicine, and entertainment. glTF is a royalty-free 3D asset file format for the efficient transmission and loading of 3D scenes and models by engines and applications. glTF minimizes the size of 3D assets, and the runtime processing needed to unpack and use them, and includes advanced asset properties such as materials based on physically based rendering (PBR). glTF defines an extensible publishing format that streamlines authoring workflows and interactive services by enabling the interoperable use of 3D content across platforms.

As the results from this liaison, the draft X3D 4.0 International Standard is now upgraded to reference the advanced graphics lighting and rendering functionality provided by glTF, including PBR materials. This compatibility will further expand the ability to deploy compelling 3D assets throughout the Web. Ongoing liaison cooperation will include feeding X3D requirements into the development of glTF and other Khronos standards for advanced use cases such as augmented and virtual reality.

"Expanding the use of 3D on the Web, and bringing the metaverse to life, will require a constellation of open standards working seamlessly together. Khronos is committed to cooperating with other standards organizations so we can work together for enhanced interoperability, and maximized synergy, to meet industry needs rapidly and effectively. Web3D and Khronos have had a positive working relationship for many years, and now we are delighted to formalize our liaison for even closer collaboration," said Neil Trevett, Khronos President.

"X3D support for Khronos glTF and Physically Based Rendering (PBR) is a big step forward for 3D publication on the Web.  We are keen on improving on these capabilities together and will also continue working cooperatively through ISO to deploy these developments across multiple additional world-wide standards." Don Brutzman, Ph.D., Web3D Consortium, X3D Working Group co-chair.

Khronos® is a registered trademark, and glTF™ is a trademark of The Khronos Group Inc.